***Reference Sheets are free! Check the "Demos" section below to download Playbooks, Situations, and The Job, everything that players would need. Please do still buy the game but if you own it and want to play with your friends, they don't have to also buy it, they can just download the reference sheets and they're good to go. (If they enjoy playing, maybe suggest they throw a few dollars my way though) ***

In the Near Future, following ecological collapse, gangs of gregarious youths scale skyscrapers, commune with ghosts, and dodge mech police to engage in the high tech, high octane world of fish crime.

In this Belonging Outside Belonging game, you play as queer fisherfolk trying to make a life in a world where a dozen billionaires have killed the earth.

There are still fish that swim in the rivers of the world. Muddy brown perch that flop and writhe, coated in thin oils. Your grandmother tells you stories of reefs with dozens of different species and colors, busy patterns moving in stressful, choking throngs of life.

You don’t know what you’d do with one, but sometimes you wonder. A fish doesn’t do anyone any good when it’s locked up. As common as the rumors of the living dead are, so are the rumors of secret activists, elusive ecological warriors who’d pay big for a live specimen. Pay so good you could live easy, eat real cheese for once. So you get some friends together, some queer folks who live on the edge. Some ratty skater punks with hacker skills maybe, or some beefcakes with big arms and scars from pulling catfish out of their holes with their own fists. You get your gang of gregarious youths ready to engage in the high tech world of high octane fish crime.

With a backpack full of landmines and a telescoping rod, you sneak through the tightest defenses. It’s funny how the most sophisticated mech police droids out there can still get gummed up with a well-placed Texas Rig. Scaling massive skyscrapers lined with solar panels, you reach into the heavens and steal angels, prying ghosts from the clutches of the elite. What you could never have expected was the active spirits of the dead, the echoes of near extinction, to call to you so strongly.

This Is A Game About Fishing. You’re going to play some queer fisherfolk in a world that has faced ecological apocalypse. The world in which you live is doing… alright, I guess. People get by, although some people have it much better than others. Much, much better. The folks in charge of destroying the world have names and addresses, and this game encourages you to take back a little bit of the environment from them.

This is also a game about shitposting, about stretching the limits of credulity, and about how the absurd can offer shelter to those in need. When your world is inches from collapse it can be difficult to keep your head above water. The power of absurd humor is that it highlights how absurd the “serious” is. This game is not a pipe, but you should wield it like one to fight depression away. Be silly, be weird, be gay, do crime.

If the price of this game is a hardship to you, or you find yourself in financial hardship, please take advantage of the Community Copies down below!

In order to download this game you must purchase it at or above the minimum price of $15 USD. You will get access to the following files:

Support this game at or above a special price point to receive something exclusive.

This game is available as a physical zine/card deck. Order at this level to be shipped a physical copy! Every physical copy adds two Community Copies to the pool for folks who are not able to pay full price for digital copies.

REMEMBER TO FILL OUT YOUR ADDRESS!!!

Itchio will allow you to select this option without requiring you to fill out your address. If you forget to fill your address out at time of purchase, or if Itchio does not prompt you for an address while checking out, please email me at Taylor@RiverhouseGames.com with your order info and shipping address and I will mail you your copy!

This game looks beautiful, but I have a real, genuine question.

Most of my friends are queer, but I'm not. I'm straight, white, cisgender, heterosexual. I'm other things too but I am also certainly those things.

Can I play TIAGAF? Or am I partaking in an experience that just is not meant for me?

Hey thanks for the question! You can definitely play! TIAGAF is meant for everyone except bigots. I encourage you to play a queer character when you play, and if your friends are comfortable sharing their experiences as queer people I encourage you to listen to them and think about how you can explore in this space! I’d love to hear how your game goes, and if your group is ok with it I’d love to get a DM or email with how it went!

Up until an hour ago, I was cautiously optimistic that I had written the first fishing trpg.

Not only did TIAGAF beat me by a mile, it's also ridiculously good.

The writing's super engaging---pulpy, fun, and everything feels like it makes perfect sense within the setting.

The game concept is also really strong. You're daring misfits on a post-apocalyptic anti-corporate fish heist. You punch mechs and steal pike from heavily guarded vault-aquariums.

The whole game channels this same sort of almost supernatural level of "yes and", with all player actions succeeding and the whole group just sort of one-upping each other to make the story more high-octane and ridiculous, and the whole time the wonderful flavor of the book is leaning right in and saying "what happens next?"

Honestly, it's Mirror's Edge but you're stealing carp. I don't know what stronger endorsement I can give a thing.

This is an incredible review thank you! I’m so happy you enjoyed the read & thank you for brightening my morning!

It's a really cool game!

Also I wanted to ask, would it be okay if I put a link to TIAGAF on my fishgame's page? I want to promote this niche microgenre when I can, and I'd like to put links to other fishgames as I find them.

I've also updated the advertising for my game so that it's not claiming to be "possibly the first fishing rpg." I'd googled the genre before writing that line, but TIAGAF didn't surface in the search results, and now I'm wondering how many others I completely missed.

Go for it! That makes me delighted. I’m always on the lookout for more fishing RPGs!!

What's the minimum # of players needed to start the game? I can't quite tell from the documentation. Is a player needed for each of the listed playbooks or are those just listed as examples for roles to fill? Thanks for the work you put in!

Good question! I’ll add something to the games description to clarify. You can play with as few as 2 players but the magic number is 3-5 from my experience.

I wasn't sure at the start of the description because this all sounds a bit close to home, but the paragraph about how absurdity in play can help because everything is absurd right now but is absolutely the mind set of my community right now so I'm hekkin keen 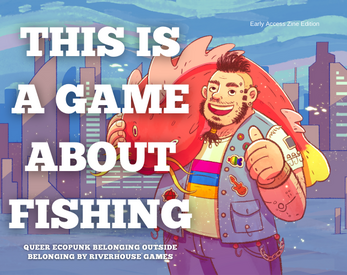 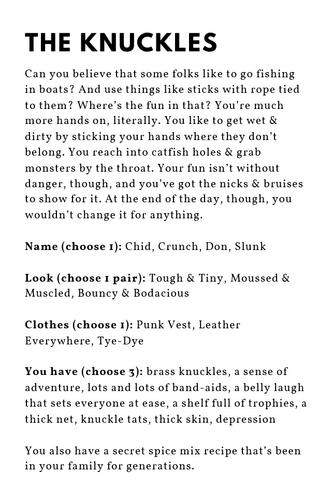 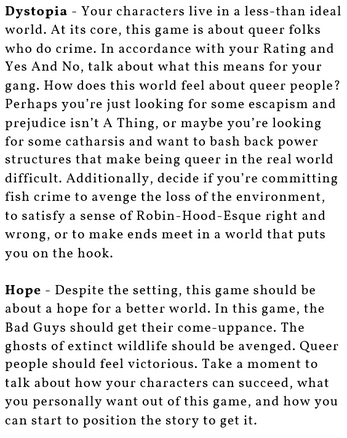