A downloadable wall of sound

Machine Gun is a game for two or more players.

It’s a game about jazz, about improvisation, about experience without meaning, and about creation in the moment. It should be a wild and chaotic time. You may, at certain points during play, become confused, frustrated, inhibited, or at a loss for what to do next. This is important and desired.

The secret heart of this game (well, not so secret now) is that none of these emotions:

In order to download this wall of sound you must purchase it at or above the minimum price of $5 USD. You will get access to the following files:

Support this wall of sound at or above a special price point to receive something exclusive.

Hoping for Community Copies soon... Mostly would like to know what kind of a game exactly it is

I promise myself now I will find someone to play this game with.

Here's what's great about games from Riverhouse Games: They oftentimes interrogate the definition of a "game." After reading one, I re-examine memories of childhood, half-remembered games that seemed to spring fully formed but still managed to dissolve like sea foam. There was one that involved moving around on one's knees on grass, pinching one's hands in a crab like motion, attempting to catch one's fellows. This was called "King Cobra." Were our hands meant to be fangs? Or the hood of a cobra? These details are lost. It was a fantastic game.

Here's something else that's great about MACHINE GUN: [imagine here the sound of a drum kit kicked down wooden stairs that descend into an unfinished basement, a space with nothing but potential in dim light] 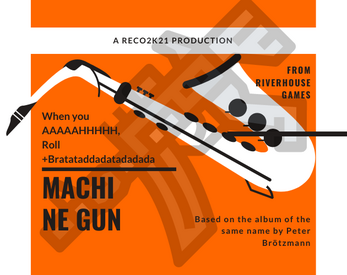