Submitted to both the Not A Game Jam Game Jam 2021 and the Record Collection Jam 2022, Riverhouse Games presents a take on determinism, purpose, and narrative experience within the roleplaying game.

Despite entry into a jam that is explicitly about non-games, Grease Phase goes out of its way to declare that it is one. This insistence challenges the player to then examine their expectations of "game" and explore thoughts on interactivity, play, and form. Does the game lie, and if so, how is the player able to identify the lie? If the game speaks truly, what then does that mean both for it and for the label it applies to itself?

In his 1968 essay entitled "Music as a Gradual Process" Steve Reich writes "Though I may have the pleasure of discovering musical processes and composing the musical material to run through them, once the process is set up and loaded it runs by itself." While not a direct 1:1 analogue, the principle of musical process when applied to the medium of roleplaying games allows Grease Phase to operate on the same self-deterministic level as the musical works it references. As a piece of art the game was "discovered" and "composed" but yet is self-running (and even self-identifying).

The author says of the art that "It came to me in a dream I had while high and I kept playing it in my imagination while flexing different muscles in my body". By disclaiming responsibility for its creation, this history lends authority to the game's own self-determination. It was something that "came to" the author and not something that was fabricated.

The self-deterministic insistence of identity ("You are about to play a roleplaying game") contacting expectations of a player ("a roleplaying game looks/acts/is a series of ideas and conditions") is the conflict Grease Phase seeks to expose. When a thing cannot hope to achieve a purpose imposed upon it, despite its insistence on a purpose (its own or otherwise), what then do we make of the thing or the purpose?

Parallel to this question of identity and purpose is an examination of the movement of play within games with more than one player and the cooperative yet divergent experience of "narrative". It is impossible for each player in a roleplaying game to experience the exact same story as it is being produced. When a GM says "the elf jumps out from behind the tree and surprises you" each player produces their own interpretation of events. This dissimilarity is based both on their own relationship to the individual words in the sentence and their relationship to the larger tropes and themes. What one person sees as "elf" is different than the person next to them, as is their expectation of larger genre tropes (are elves helpful or hostile? what does my character think of the concept of surprise? should I roll initiative? etc).

As the parallel threads in Grease Phase slowly diverge and come together so too do the narratives in roleplaying games. Oftentimes narrative diverges only as much as it can before needing to be rubber-banded back through calibration ("wait does this elf look like it's going to attack?") or clarification ("wait, no I meant it more like..."). By exposing the phase differences in the listening of Grease Phase, the game invites the player to be aware of this shift within other examples of media.

Like a kind of pollution. Frames of life you scrub off over every drain & spill on behind every garage & take out from every ground remodel mix together. Travel together. Every drop of the past races every other. A downhill mountain pass night after night to the final level. Every trip your life’s rubber sheds from tires needing rotating or replacing. Every bladder’s stimulation flushing prescription. Every aww’s well-oiled keto dump flushable wipe of raw sewage finding river. Every purchase’s parking lot ringlets left like a pints without coasters. Each a message in bottle self-addressed. Each the ocean marks return to sender, eddying “rescind rescind rescind word” 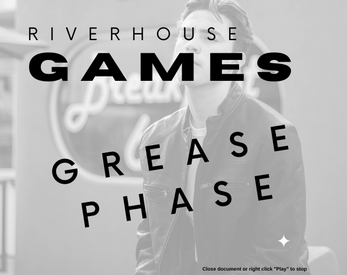